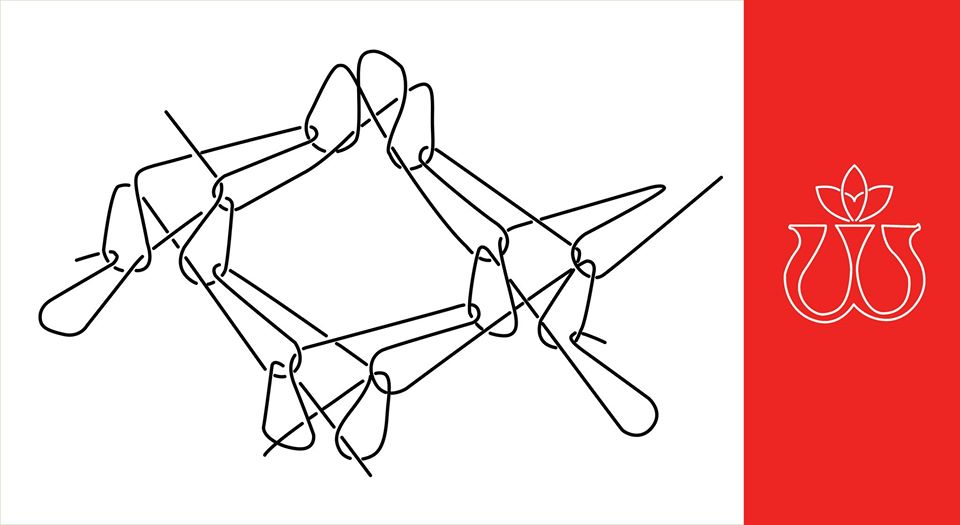 PEJVAK (Rouzbeh Akhbari and Felix Kalmenson) show “In Its Place, Only Steel”

Black mulberry traces on white fabric… Neon lights on felt…Crane with iron chain…Soft ornamented red, green and yellow chiffon curtains on the windows… Tar… Remaining all of these objects together and separately, I try to remember the whole picture, try to talk about the exhibition “In Its Place Only Steel”.

During June 20-29, 2019 we hosted PEJVAK (Rouzbeh Akhbari and Felix Kalmenson) show “In Its Place, Only Steel” at the State Silk Museum. Exhibition opening date – June 20, 2019 – is known as Gavrilov Night in Georgia’s recent history. The dispersed protest turned the evening of June 20 into one of the fateful events that reflects recent political reality of Georgia. This was the reason why only very few people were able to come to the museum and visit this exhibition. This date and fact coincided with the exhibition, which itself offered the visitor an artistic rethinking about the socio-cultural aspects of the South Caucasus region.

The idea and the design of the exhibition, with a unified artistic vision and creative approach, linked together the facts, events and processes from different periods. New objects created for the exhibition, museum exhibits and artefacts of the past were synthesized with each other, creating visual hints and conceptual accents in the space. The exhibition concept concerned the development of the tar (oriental musical instrument) and the history of Azerbaijani folklore, the pre-industrial and industrial past of the town of Shusha. The authors of the exhibition presented their artistic vision by reflecting on factual and historical information. Such non-linear, complex interpretation of historical events can be seen as part of PEJVAK’s artistic practice.

Tar is an oriental musical instrument of Iranian origin made from mulberry wood with silk strings. The text of the exhibition discussed the development of the Azerbaijani tar, which is associated with the name of musician Maestro Sadiqjan, from the town of Shusha. Shusha was famous for its musical tradition, where “Karabakh Mugham” – Azerbaijani folk music and dance were taught. At the same time, Shusha with its mulberry plantation was a trade center for silk production. During the Soviet Era local production was transformed and modernized; different industrial establishments were established including Yerevan Silk Factory. The collapse of the Soviet Union and the sudden start of the armed conflict between Azerbaijan and Armenia, critically affected the town of Shusha, leading to the destruction of both the silk industry and the Mugham music academy.

“In Its Place, Only Steel”, an exhibition inspired by Karabakhi mulberry trees, remained as a unique experience in my memory. Contrasting materials – fine fabric (the last batch of the Yerevan Silk Factory) and details of the brutal, machine-made steel production created the exhibition dramaturgy and a kind of scenography in the space. Every detail, like a micro-story, transmitted an evocative force; The illumination, the light-and-shade, color and texture added extra intensity to the exposure. During the exhibition opening, such aesthetic charm was further enhanced by the performance of Azeri tar player Ramin Pirmamadov.

While listening to the Mugham tones, the central object of the exhibition – the emblem of the silk factory made of neon on the felt and the inscription could become an excuse for endless thinking. To me, personally, this exhibition is still a subject of consideration as a visual metaphor of time; as an imaginary “Ode” to tangible and intangible memories, place and history. Halted for a second in the cyclical dynamics of the facts, maybe “In Its Place, Only Steel” says more than the chronicle of history?

Collection of Dyes at the Silk Museum

Isolation and Connections: Objects as Metaphors