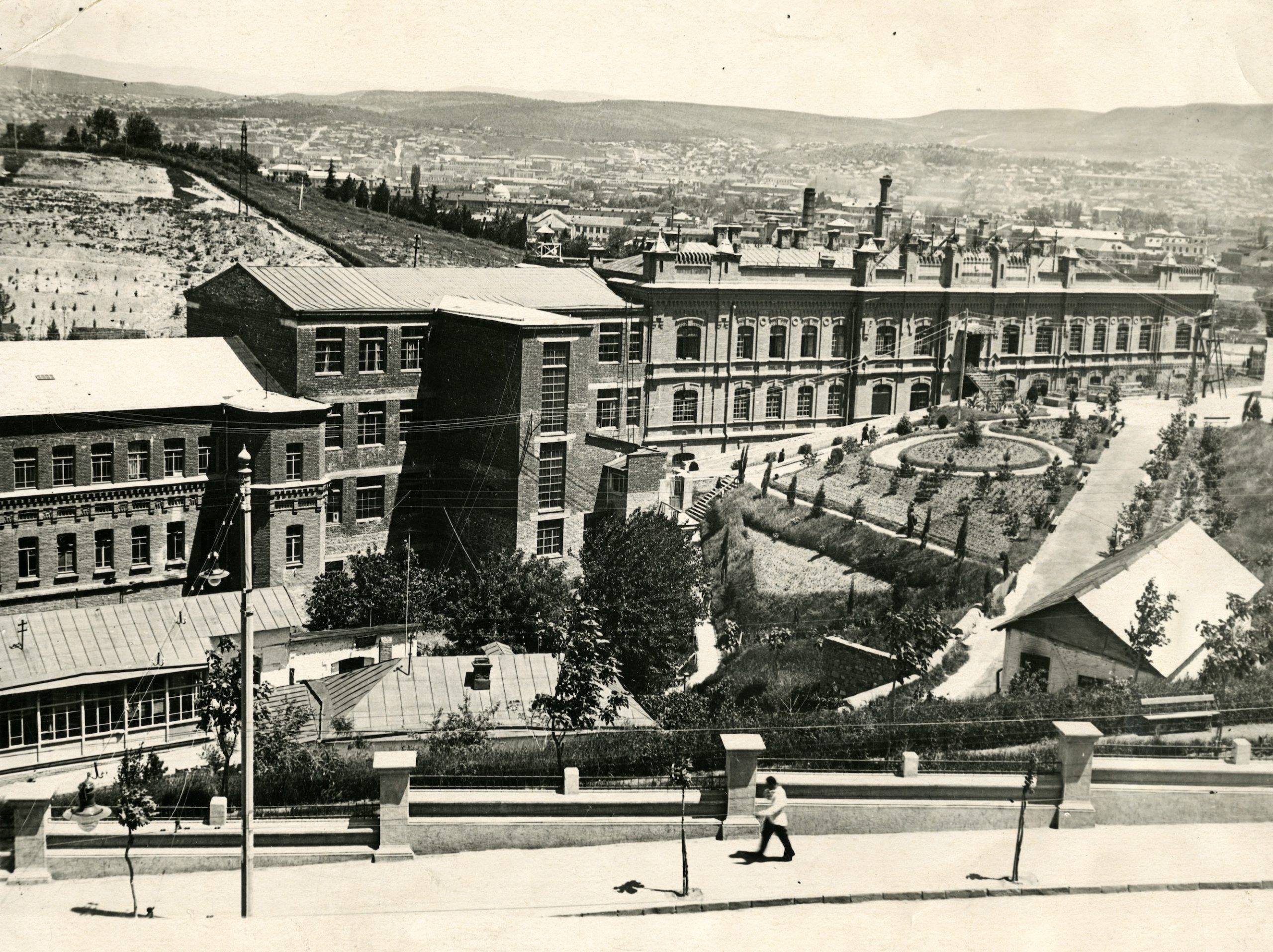 Photo from the National Archives of Georgia

Tbilisi Silk Weaving Factory, which many of us have heard about, was founded in 1928 inside the former tobacco mill of Tbilisi. The building itself was constructed in 1883 and met all the requirements for production. As we know, the only necessity was to get more light by enlarging the windows.

The establishment of the weaving factory was followed by opening a textile manufacturing school, which provided a reasonably qualified workforce for the factory.

In parallel, silk-spinning mills in Telavi, Samtredia, and Zugdidi provided thread for the factory.

Historical weaving workshops that existed on the left side of the River Mtkvari (around today’s G. Chitaia Square), moved to the right bank of the river, on presently called M. Kostava street.

What was the factory creating?

For years, the factory was producing natural and synthetic fabrics. From the 1960s, it was fully able to produce artificial silk and started weaving nylon. As we know, in 1964 waterproof fabric was made from pure nylon. Lining was weaved on pneumatic looms. Lavsan textiles with names such as “Melano,” “Irma,” “Vazha” (names in Georgia), “Narinji” (orange color in Georgian), and others were liked a lot.

Who was creating the textiles?

Textile industries provide hundreds of thousand meters of fabrics worldwide. These textiles cover our bodies and adorn our environment. Artists, who create samples and try to satisfy our as well as market requirements, often remain unknown.

Artists, designers, and workers of Tbilisi Silk Weaving Factory were creating fabrics of various designs. These were mostly geometric and floral motifs. We rarely find figurative forms that were denied as geometric patterns were favored. Also, they did not show the influence of a particular social class. The patterns were drafted according to a predefined pallet and had to be approved by the art council.

Because of World War II, the factory had to start dyeing military textiles. As employees were drafted into the war, dye-works had a lack of workers. The factory started to create fabrics for parachutes.

After the 70s, the Silk Production Association was established. It united three productions – silk weaving, jacquard, and pile textile factories.

In 1977, following almost half a century of the factory’s work, the Association manufactured more than 16.3 million meters of products.

From the 90s, the factory reduced its production and then ceased to exist.

What is our industrial heritage telling us?

In 2016, in collaboration with curator Irena Popiashvili, I implemented an exhibition “Soviet Rainbow: From Textile Shop to Museum”. It took place at the Silk Museum in the framework of the project “Art Intervention at the Museum.” The exhibition thematically concerned the industries of Georgian silk and textiles in general. Soviet-time fabrics and various objects were utilized in new works that were exhibited among the main items in the museum’s space.

In parallel to the exposition, the exhibition banners were placed in different parts of Tbilisi where the well-known textile stores used to be: the famous “Gigla’s textile shop” on Rustaveli Avenue, which was selling desirable Georgian silk fabrics; at the former Central Department Store of Tbilisi, instead of which current “Galleria Tbilisi” was built. By placing the banners in the city, perhaps, its inhabitants were reminded about the places that used to constitute their collective memory.

In June 2020, in collaboration with curator Tara McDowell, I hosted a day-long dialogue-tour concerning the industrial heritage of Tbilisi. It unfolded around the topics concerning Tbilisi Silk Weaving Factory.

“I Demand a Voice”